Hotel Pettra Santiago in Santiago´s exclusive La Dehesa district, at the foot of the Andes. The hotel is the closest to the ski centers...

Le Rêve Hotel Boutique team have one goal; to make you our guest, feel perfectly at home in the beautiful and tranquil surroundings of...

Rugendas Hotel Boutique is in the El Golf district of Santiago, a short walk from Tobalaba and El Golf Metro Stations. It is near shops... 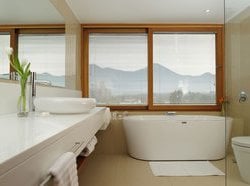 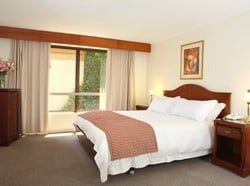 The 4-star Neruda offers a blend of classical and contemporary décor in Santiago's upscale Providencia neighborhood, 11 mi from Benitez...

Featuring a rooftop swimming pool and hot tub with panoramic views of the city and mountains, Best Western Premier Marina Las Condes is a...

With a stay at Capital Aparthotel in Santiago, you'll be minutes from test POI and Mapocho Cultural Center. This aparthotel is close to...

Located in the exclusive and trendy neighborhood of Providencia in Santiago, Hotel Bonaparte Boutique offers accommodations with free... 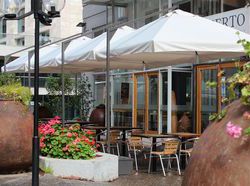 Located in the trendy neighborhood of Providencia in Santiago, Tempo Rent Apart Hotel offers accommodations a 2-minute walk from Los...

The capital of Chile, also known as Santiago, is the largest city in the country, as well as its economic, political and cultural center, not to mention one of the greatest metropolitan areas of the world. Santiago de Chile has its origins in very remote and prehistoric times, but its greatest development occurred under the Incan Empire and later, during the period of Spanish colonization; similar to its neighboring countries. After Chilean independence in 1810, Santiago was elevated to the position of state capital. Nowadays, the Republic of Chile and its capital boast of their modernity and continuous development, showing the city off to the world as a renewed site that is full of enchantment.

Santiago de Chile is located on a plain near the Andean mountain range; bathed by the waters of the Maipo River, it has a cold climate during the hot months of northern summer and is warm during our summer season. Due to its climate and position, it is a control post for skiing in the magnificent Andean mountain range; indeed, skiing is one of its strongest tourist attractions.

But not only does Santiago de Chile earn its living from skiing; this city boasts an extensive pre-Columbian character, demonstrated by places such as the Museum of Pre-Columbian Art. It is well worth visiting the district of Bellavista, one of the most typical areas of the city, or visit the Metropolitan Cathedral, La Casa de La Moneda, Plaza de la Constitución, Plaza de Armas or el Barrio de Bellas Artes; following in the steps of Pedro de Valdavía, soaking up the local flavor, losing yourself among its side streets full of aromas or living in a city with enchantment and tradition that will please everyone.

In Santiago we will have clear sky, a rise in temperature is expected; dress in soft clothing.

Points of Interest in Santiago

Are you reserving a hotel room in Santiago and have no way to get there? Book your flight now with Destinia!

The most centrally located hotels in Santiago with the best ratings are: Casa Bueras Boutique Hotel and Hotel Alcala del Rio.

It depends on the category of the hotel. If you want to stay at a 4-star hotel in Santiago, the average price per night is €33, while you will pay an average of €25 for a 3-star hotel, and in a more luxurious 5-star hotel, you"ll pay around €58.

You can make reservations at Hotel Crowne Plaza Santiago Chile, Hotel Eco Boutique Bidasoa and Hotel NH Collection Plaza Santiago if you"re looking for a hotel with valet service for your visit to Santiago.

If you´re looking for peace and quiet and want to stay at an adult-only hotel in Santiago, we recommend Hotel 45 by Director.

According to our clients, if you´re travelling with children, the best hotels in Santiago are Hotel Santiago, Hotel Plaza San Francisco and Hotel Eco Boutique Bidasoa.

If you want to save time, the hotels in Santiago with express check-in and check-out are Hotel Crowne Plaza Santiago Chile, Hotel NH Collection Plaza Santiago and Hotel Plaza San Francisco.

Some of the options for hotels with non-smoking rooms in Santiago are Hotel Eco Boutique Bidasoa, Hotel NH Collection Plaza Santiago and Hotel Kennedy.