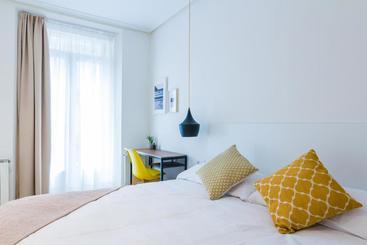 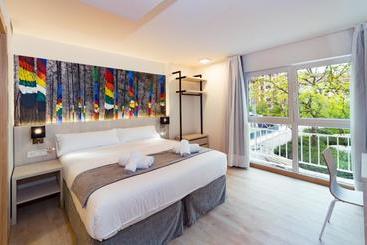 Atotxa Rooms is located in San Sebastián, within the bohemian neighborhood of Egia, a 1-minute walk from the International... 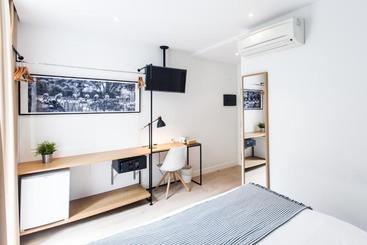 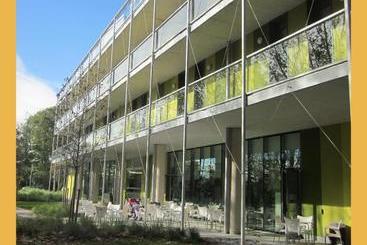 This colorful hostel is located in Ametzagaña Park, 2.5 mi from the center of San Sebastián. It offers modern rooms and... 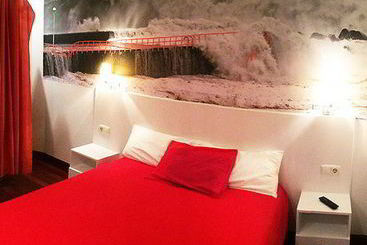 Pensión Koxka Bi is a small, modern guest house in the very heart of old San Sebastian. Just steps from the Teatro Principal... 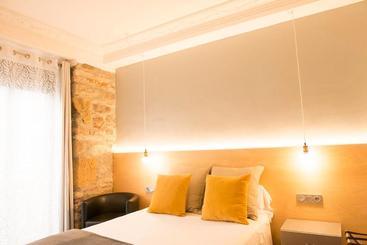 One of the identifying characteristics of Donosti-San Sebastián is its beaches, which lie at the foot of the city, separated from it only by a white railing, which is recognizable by the stamp you see there.
There are four spectacular beaches that draw much tourism during the summer  as well as throughout the year  thanks to the cultural activities carried out in Donosti, like the internationally-renowned Cinema Festival of San Sebastián.
The beaches of Ondarreta and La Concha are just opposite each other, and united by the contour of the bay. In the heart of the bay itself is the Island of Santa Clara, which contains its own beach. And to the other side of the coast, next to the mouth of the Urumea River, in the district of Gros, is the beach of Zurriola.
They are beaches of fine sand, and typically of this coastline, the water is fairly cool. And, because of the shelter provided by the bay, there is hardly any surge.
San Sebastián is divided into a multitude of districts, each with its distinguishing enchantments. This is a big city that offers much to see. The most commercial zone is found in the district of Gros, next to Zurriola. Of the different places of interest in the city, you can choose from views of Mount Igueldo, the facades of Calle Reina Regente (which gives a sampling of the citys architecture), the Maria Cristina Bridge, the Kursaal, and many other important places.
The nocturnal side of the city offers a plethora of possibility: the most typical summer diversion is found in the neighborhood of del Gros, but there is a multitude of pubs, discos, bars and cabarets to enjoy all over Donosti.
See more See less

It depends on the category of the hotel. If you want to stay at a 4-star hotel in San Sebastian, the average price per night is €38, while you will pay an average of €28 for a 3-star hotel, and in a more luxurious 5-star hotel, you"ll pay around €115.

If you're bringing a vehicle, we recommend that you book a hotel with parking in San Sebastian, like Hotel Leku Eder, Irenaz Resort Apartamentos or Pension Aldamar.

You can make reservations at Hotel De Londres Y De Inglaterra, Hotel Maria Cristina, A Luxury Collection , San Sebastian and Sercotel Europa if you"re looking for a hotel with valet service for your visit to San Sebastian.

If you want to save time, the hotels in San Sebastian with express check-in and check-out are Irenaz Resort Apartamentos, Hotel Maria Cristina, A Luxury Collection , San Sebastian and Hotel Zaragoza Plaza.

Some of the options for hotels with non-smoking rooms in San Sebastian are Hotel Leku Eder, Hotel Pension Alameda and Irenaz Resort Apartamentos.